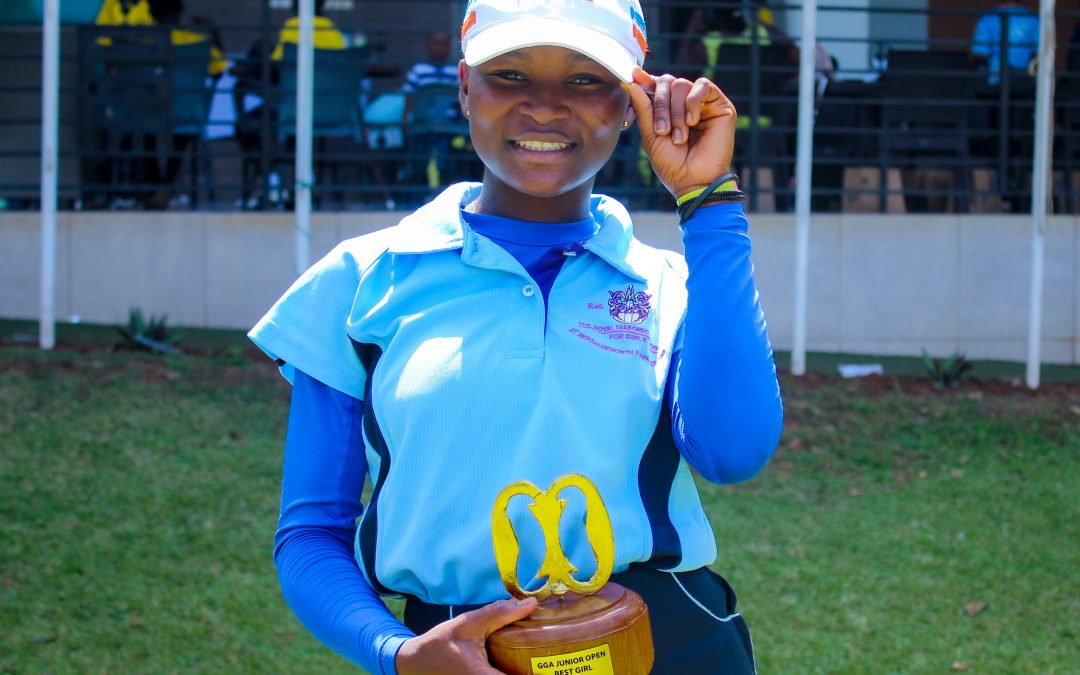 The event was a national event that brought together junior golfers from all parts of Ghana to compete at the Achimota golf course. Afi Amezado represented the Fafali Organization along with sixteen other children from the Fafali Golf & Goal project.

Afi clinched the prize by overcoming fierce competition from other standout performers in the hole-18 matchup. She had some thankful words for her trainers and what is keeping her motivated to become the best version of herself.

“I am very grateful to God and excited for the opportunity to be among the winners of this award (GGA Junior Open best girl). This wouldn’t be possible without the guidance of my coaches and trainers as well as the support of the Fafali Organization” Afi said. “I have always dreamt of becoming the biggest golf star and I think this is just the beginning and all these things just keep me motivated for the journey of the future” She added.

Afi Amezado is the first child of a family of five (5) children who aren’t well-to-do. She has been a protégé of the Fafali Organization ever since she was born and has shown great signs of becoming the best golfer of her time if given the right guidance and resources. Afi is a multi-talented child who doesn’t limit her abilities by sticking to just one field. She is a member of the Fafali Website design class, and female soccer team, she can dance, and do a whole lot more. She strives for the best at all times so she can become the source of hope for her family as well as every young up-and-coming child from the Kissehman community.

The Fafali Organization was honored to have two winners on the day as Paulo Quarshie won the GGA Junior best Under-10 player after clinching the first spot in the short course competition.

Paulo Quarshie is one of the youngest golfers from the Fafali Golf & Goal project who has over the years shown a great knowledge of the game of golf. His understanding of the game transcends what a child at his age should be preview to, but adequate preparation and good work ethic saw him lift the award for the best Under-10 player.

GGA is the abbreviation for Ghana Golf Association. The GGA is mandated to promote the game of Golf in Ghana, both Amateur and Professional; regulate all attributes pertaining to golf, inclusive of interclub’s disputes, and enforcing the rules of Golf in accordance with the rules of the World Ruling Body, Royal and Ancient (R&A) of St Andrews, Scotland. They also hold the Juniors Open for young golfers all over the country as a developmental project.

The Fafali Organization has also contributed its quota to the development of the game of golf in Ghana. Fafali is a nonprofit organization that is comprised of a dynamic group of individuals of different backgrounds, age groups, race, and educational backgrounds with a common goal to uplift, inspire, and provide resources to underserved children across Africa, starting from Ghana. There are different programs opened to engage children in the Anunmle Electoral Area like the Ball & Brain, STEM project, and the Golf & Goal project among others. Through the Golf & Goal project, the Fafali Organization has developed over 100 talents who have gone ahead to win many national championships since its inception.

Senyo Sosu, CEO of the Fafali Organization, talks about how far the Golf & Goal project has come and how Afi Amezado and Paulo Quarshie’s success at the tournament is going to ignite the flame of the project and push everyone to work a step harder.

“The Golf & Goal project has been in inception for over 5 years at the Achimota Golf Club and we use this medium to dismantle the perception that, the talented poor child cannot play golf. We also try to combine academics with playing the game of golf which is why we named the project Golf & Goal” Senyo said. “Seeing Afi and Paulo excel at such a high level only urges us to even go the extra mile of pushing these kids to the best of their limits so they can attain their goals of becoming professional golfers in the world” He added.