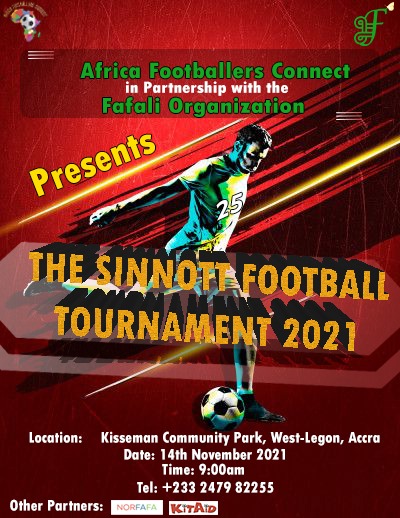 Fafali organization is set to host the maiden edition of the Jordan Sinnott memorial game on the 14th of November, 2021 at the kissehman community park, Accra.

The tournament will be hosted by Africa Footballers Connect in partnership with the Fafali Organization. Other major partners include KitAid UK and Jordan Sinnott Foundation Trust.

In an interview with the organizer of this year’s tournament, Sadique Walker (Chief Operating Officer, Fafali organization and CEO of Africa footballers connect), he mentioned the essence of organizing such a tournament, “is to create an eternal memory for the man (Jordan Sinnott) and also use this opportunity to promote African football and create opportunities for African talented footballers”.

Sadique Walker added that this tournament is to also celebrate how great of a person Jordan Sinnott was and to raise awareness about his tragic and untimely death, as they don’t want anyone to suffer a similar fate.

Jordan Sinnott died in hospital after suffering a fractured skull and brain damage following the assault in Retford, Nottinghamshire, on 25 January 2020. His killers have since been jailed for 11yrs.

Over sixty (60) teams declared their intention to feature in this year’s tournament but we had to cut down the number since it is our first year organzing the event. The hope is to have more participants in subsequent tournaments.

The maiden edition of the tournament will include four (4) teams who will battle it out to win jerseys donated by KitAid by European teams with a customized Sinnot name as well as jerseys from teams Jordan Sinnott featured for.

All four teams will have analyzed soccer advice from a European Talent Identification expert, network, and promotional opportunities on all our social media handles.

The hope is for this tournament to become a yearly event as a means to continue the legacy of Jordan Sinnott. Besides the prizes, the tournament will be used to talk about the tragedy of Jordan Sinnott and the similar happenings in our communities and country, what we can do as citizens to make the world a safer and a better place for all.

Since this is going to be a competition, every team will strive to win the ultimate and as humans, as we are, we are bound to err one way or the other which may result in hooliganism. The organizer of the tournament explained briefly, how they intend to curb such a situation.

“What we have started with is to get involved with managers of the teams that are going to participate and we have had discussions with them that this is not a competition where they have to worry about winning but rather, we want the love to flow,” Sadique Walker said.

The passing of Jordan Sinnott is an unfortunate one, and by playing this tournament, we hope to put smiles on the faces of his loved ones, especially his fiancée, Kelly Bossons, and daughter, Maisie.