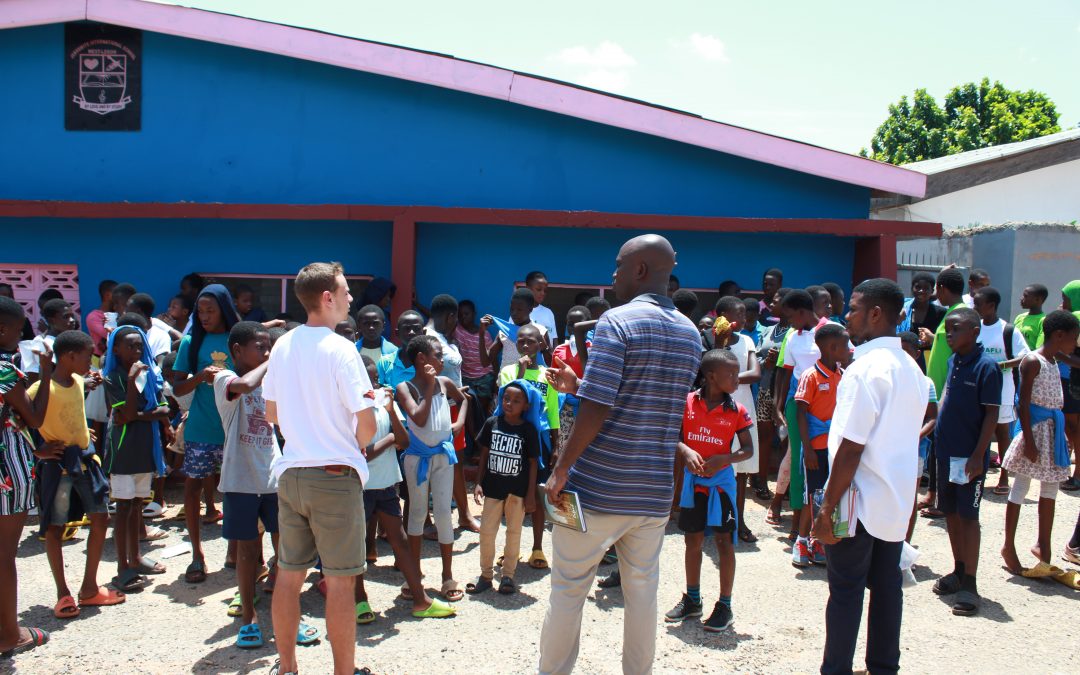 Blending studies with fun falls right under the core mandate of the Fafali Organization as we hosted over a hundred (100) children for this year’s spring break camp.

The event was a four (4) day program from the 20th-23rd April 2022 in the Anunmle Electoral Area for children of all ages and gender.

The event also explored the two-events-a-day approach where these kids studied in the day from 9 am-11 am and later came back to the playing fields from 3 pm-5 pm. Jerremites Academy hosted the classroom sessions while the Anunmle School Park and the Achimota Golf Club hosted the extracurricular activities.

The Fafali Organization came up with seven (7) practical courses we believed could impact these children’s lives in the long run as far as career choices and community involvement are concerned. These courses include; Financial Literacy, Graphic Design, Environmental Studies, Mathematics & Science, Picture Competition, and Baking, as well as finding problems and finding solutions to issues in the Anunmle Electoral Area.

The Programs Coordinator of the Fafali Organization, Pablo Weeden, narrated how this idea of having a spring break camp for these kids and how the event turned out.

“We as an organization realized the need to keep these children engaged while they were on vacation from school. We noticed that the lack of regular activities pushed these children into some unacceptable practices that do not speak well of the community and is harming all of us. So to curb that, the idea of organizing the Spring Break Camp came up where we planned on keeping these children engaged in activities they would enjoy as well as set them up for life” He said. Pablo added that the event “turned out as expected” which was reflective in the number of children who showed up and how happy they were to be there.

There were three (3) days of classroom sessions (i.e. 20th-22nd) and all children were presented with the opportunity of selecting courses they felt comfortable and confident with. The problem finding and provision of solutions to issues in the Anunmle Electoral Area was a general class where all the children were tasked to write down problems they could identify in the community and suggest practical solutions to these problems.

The most prevalent problems mentioned during this exercise were; teenage pregnancy, lack of education, child abuse, sexual abuse, drug abuse, and poor sanitation. They took it a step further by proposing some lasting solutions to these problems like; encouraging parental guidance, education on issues of sanitation and drug abuse, prosecuting people who indulge in abusing others sexually, etc.

After the general sessions, students were split into their classes of choice (Environmental Studies, Financial Literacy, Picture Competition, Graphic Design, Baking, and Mathematics and Science.

Environmental Studies was to enlighten these children about ways of taking care of our community to improve sanitation and also to educate others about how fast we are damaging our communities.

Financial Literacy as a course sought to enlighten the girl child on ways to handle money. Children are taught ways to save money at such a tender age so they have something to fall on when they require it. As an organization, we believe the girl child being financially literate opens doors to them in ways they could use to bridge the gender gap created by our society.

Graphic Design was also a course we added to the Spring Break Camp classes to teach kids to create fliers, posters, and designs as a personal skill. Children developing such a skill will only serve as a means through which they can make some money for themselves.

There was a class for students who wanted to create pictures through our picture competition. Cameras were provided for students to come up with exceptional pictures from the community to be used on the Fafali website.

Tutor for the Mathematics and Science at the camp, Senyo Sosu, CEO of the Fafali Organization shared his thoughts on the Spring Break Camp and what could be done in subsequent camps.

“Some of these kids are brilliant and all that’s needed is the system to unearth all these potentials. Having these classes gave the kids the opportunity to engage in things they are excited about as we believe imposing subjects on kids just drains them rather than elevates them.” He said. Sosu added that he hopes they can “raise funds to keep this camp going” as well as introducing “summer classes for these children” who need all the support the organization can offer.

Extracurricular activities took turns during the afternoons of the 20th-22nd of April from 3 pm – 5 pm. There was also a grand game day on Saturday, 23rd April 2022. We had different games available for these children to choose from. There were games like; Football, card games, golf, rugby, etc.

Kids were advised to participate in sports they were not familiar with as we believe children engaging in different games helps develop other parts of their bodies. A golfer playing football will enhance his athletic abilities. A footballer taking part in card games also develops his cognitive abilities to help him/her think quicker.

The grand game on Saturday brought a climax to all activities we had done from Wednesday the 20th of April. The Fafali Organization used this event to gift out sporting wears (Jerseys, football socks, soccer balls, boots, etc.) to these underserved children and awarded children who performed superbly in the problem statement and solutions to issues in the community.

Nathaniel Lalartor, a young boy from the Fafali Golf & Goal project shared his excitement when asked what the Fafali Organization’s Spring Break Camp meant to him and his colleagues.

“I am very happy to be part of this program (Fafali), I got to study at the school (Spring Break Camp) and have fun at the same time. I wish this event can go on for a long time so we get to learn more” Nathaniel said. Students were awarded based on how punctual they were to the class and how well they contributed to studies, Nathaniel was one of those students who won jerseys as a result of that and has been grateful to the Organization for coming up with such an initiative.

Find more pictures from the program below………