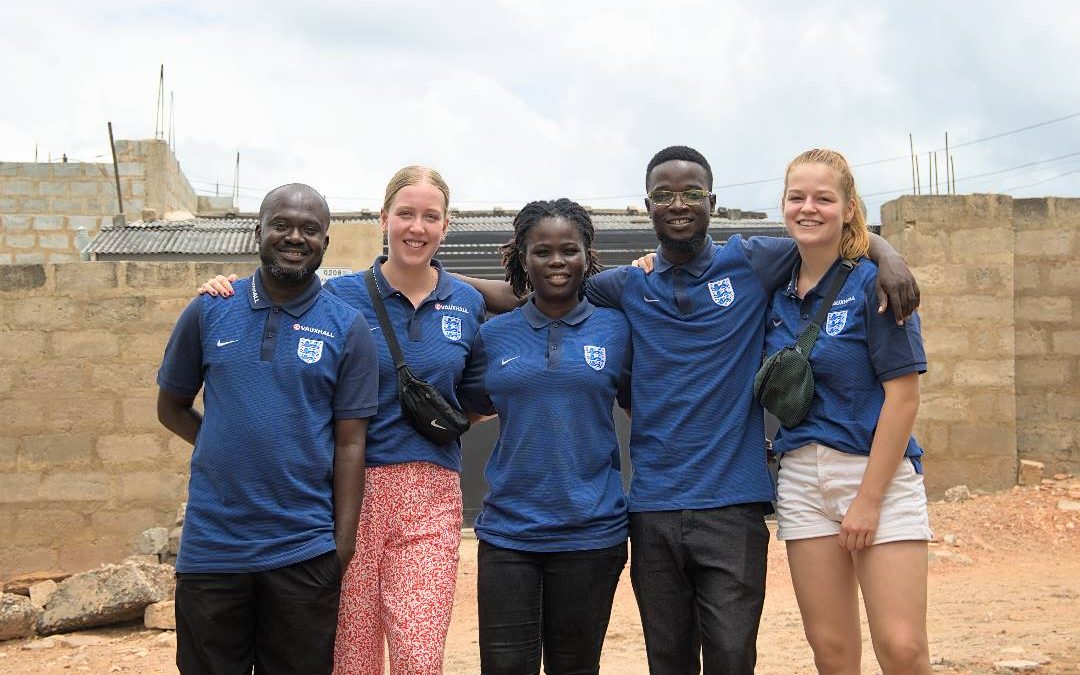 My name is Pia, I am 18 years old and until October 4 I enjoyed a very peaceful life in my home town Weil der Stadt in south-western Germany. Now I am not saying that the peacefulness stopped when I came to Ghana, but boooy, it is different here. And of course, I knew Ghana was not going to be a sunnier Germany. However, I had never been outside of Europe, so there were definitely multiple cultural shocks and surprises on the way.

Let me start at the airport. I was escorted to the airport by my dad and boyfriend as my brother had to work and my mom was “not sure if I would actually be able to leave if she were there to hold on to me”. Anyways, even with her not being there, it was a very emotional goodbye. But as soon as I entered the security area, I was too overwhelmed to be sad.

The flight from Stuttgart to Amsterdam was very short and quiet yet somehow very exciting to me as it was the first flight I had ever been on. Now, when I arrived in Amsterdam, especially in comparison to Stuttgart, the Airport was waaaay too big for my little new-to-airplanes brain. But as I had over 4 hours to get there, I found my gate on time. I had already gone through quite the Ghanaian experience at the embassy in Berlin but what still had me shocked was that the airport gate for the flight to Accra already smelled very different. Having been here for a while, I have to say that EVERYTHING does smell different, in no way bad, it just took me some time to get used to it. I also got to meet another AFS volunteer (Levin) who had arrived from Berlin and with that finally had somebody to talk to. We soon entered the airplane and after some little complications we took off.

Becky and Omar, two AFS Ghana members, picked us up at the Kotoka Airport in Accra and after getting some water and a snack, they got us to our hotel. Driving through Accra at night was a completely unrealistic experience as both Levin and I could not quite believe that we were finally here. However, as soon as we got to the hotel, I realized how extremely tired I was and pretty much immediately fell asleep.

We spent the following few days at the AFS office in West Legon. They taught us some basics about living with Ghanaian families, helped us at the immigration office, and got us new SIM Cards. Becky was also very committed to getting us used to the food so I got to try Kelewele, Jollof, fried rice, and a lot of pepper. Sometimes it was a bit hard for me to find something I could have as I do not eat fish or meat but the places we ordered from were always very nice and in some way altered their dishes to be vegetarian. These few days were a little boring at times but I think they helped me get used to the fact that I was actually in a completely different country whose culture was nothing but new to me.

Finally, on October 10th, the other volunteers visited for a first Twi lesson and I was to be sent to my host family afterward. I was extremely excited to see what my every-day-life would look like from now on. When our teacher was officially done discussing politics with Jakob, another German, we got an Uber and went straight to my host family. Funnily, the only people to welcome me were my two younger host sisters Rufina (16) and Erica (7). My host mum had spent the weekend in Kumasi and my other two sisters were at the braiding salon and a fashion school. So, I got to see my room and drop off my luggage and as I was not sure if I should wait for the others, I spent the evening at Katharina’s place and later went home hoping one of the older sisters would be there. However, they were still out so I got to bond with Erica over a game of Ludo and went to bed early. When I had almost fallen asleep, Caro (my oldest host-sister) came in to say hello and gave me some covers.

Turns out I had mistaken the bedsheet for a cover, oops. After this, the first night in my room was a bit hard because I still had not gotten used to my new home and was a bit overwhelmed by the thought of staying here for three months.

The next week I spent adapting to my new life. There was the first time eating at Mama’s (a local eatery in the neighborhood), my first light-out experience, my first bowl of Fufu (for people interested in a video, Ray posted it on Instagram) and so much more.

At Fafali, I joined Katharina in leading an athletics group which has been a lot of fun from the start. I also help with the Brain Classes that are part of the “Ball and Brain” project and started an environmental class. What I do most of the time is office work though, we mostly spend our time searching for funds and partner organizations. I am quite a social person so after a few weeks, I realized that I was just not made for sitting in front of a computer as much as I had. I felt like I was sort of missing out on what I had come here for; the culture, the people, and the individual stories I wanted to hear. After having a little conversation with Ray, we decided it would be better for me to spend a few days a week outside. So, he suggested going to a local school twice a week, helping the teachers, and reporting back to Fafali what the situation at school was like. This has already helped me in my well-being and I am very thankful that the people here were so nice and willing to improve the situation for me.

What I quickly liked about Ghanaian culture was that most people are very open and friendly. At the office, we started joking around very soon and in the streets, a lot of people would greet me, ask for my name and welcome me to the neighborhood. There were also a lot of animals running around in our neighborhood, I especially love the cute little goats running around everywhere. My family was super loving and welcoming, too. Within the first days, my host mum told me to call her “ma” or “mommy” because she felt like I was just another one of her daughters from now on. She even gave me a Ghanaian name “Afia” which is the Ashanti name for a female person born on a Friday. My family was also a lot less conservative than I had expected. Before coming here, people at preparation camps had told me to pack long pants and skirts, so that I would have something to wear in case I got into a very strict religious family. But within the first few days, my sisters had asked me why I was wearing such long skirts and if I did not have any shorter, “nicer” ones. When I explained they started laughing and told me their mum would get me some shorts at the market. My sisters were the sweetest people from the very start and I can say that by now I have started really to feel at home in my new family.

On my first weekend here, Katharina took me to the Accra Mall, a shopping center not far from where we stay that has supermarkets similar to German ones, and fast food restaurants and I have to say, it was nice seeing something that almost felt like it could be a ten-minute drive away from home. The second weekend was the complete opposite though. My colleagues took me to the Tidal Rave Beach Festival which was quite an adventure for me. From getting to the festival site through the chaotic Accra traffic to being pushed against the entrance gates to a tire bursting on our way back. It was everything but boring.

I further got to explore big sites in Accra, like the Independence Square, Osu Castle, Makola Market, and the Art Market. The most personally challenging of those was definitely Makola. This is because I had made the poor decision of wearing leggings without knowing that a lot of Ghanaians at the market would take those as a reason to yell out very inappropriate comments. I knew that the market would be a very crowded place with a lot of people touching me but I was not prepared for this.

But this was only one of many experiences. There were lots of beautiful, heart-warming moments with my family like playing and showering in the rain, my host-sister Eugenia sewing me beautiful clothes, and both of us being super excited about the way they looked on me, them teaching me Twi, me teaching them German or just laying in bed with them during a light-out. There was bantering with my colleagues at work and dancing with them at the tidal rave. And of course, I had some sad moments, too. I love my home so, at times, I miss my boyfriend, family, and friends and on occasion, even the food I am used to.

All in all, I am still very sure, that it was the right decision to not directly go to university after finishing school. I feel like there have already been quite a lot of challenges and learning how to deal with those and getting to know a completely different culture helped me grow a lot. Lastly, I have to say I am very thankful to have had this opportunity, to have found this nice family, and to have met so many nice people.